Phil Ivey vs Other Players: Toppling Over the Giants (Part 2) 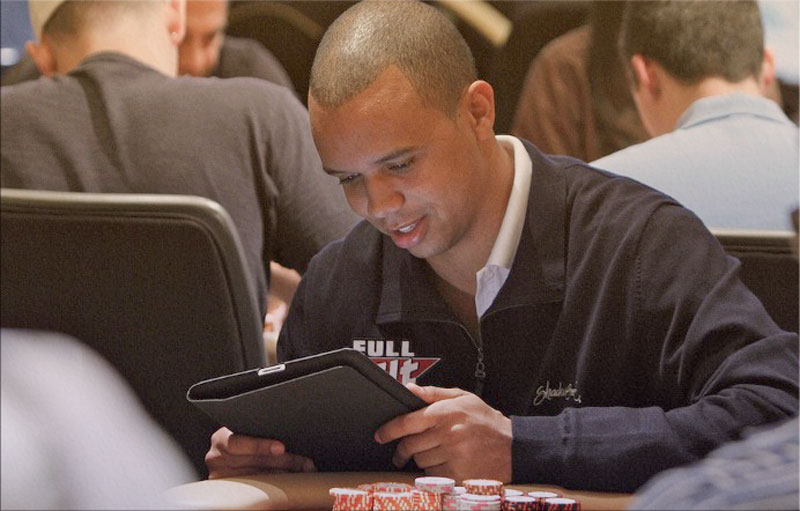 We’re now continuing our analysis of the most notable games Phil Ivey has played against his opponents. Here are the next two great examples of his poker skills, analysis, and decisions he has taken:

Tony G, aka Antanas Guoga, is a well-known poker player from Lithuania and #174 in the All Time Money List! He also plays quite successfully at WSOP tables. But he is not only a famous politician, i.e., a European Parliament member for the Liberal Movement; he is also a foul-mouthed grumbler who always provokes and intimidates his opponents! However, Tony G is highly selective; and of course, he doesn’t actually target everyone he meets by the felt, anyway! Even so, it’s safe to say his reputation does precede him!

Phil Ivey and Tony Guoga clutched horns in the Monte Carlo Millions November tournament in 2004. Here is the remarkable table:

Tony G bet $2,700 and Patrick Bruel quickly stepped out of the way – which was, or so it transpired, the right decision. Phil Ivey called having both a position and a pair. Two other players quickly folded and now only Guoga and Ivey were left to fight over the pot. The odds were almost equal (52% Ivey, 48% Guoga) and the big battle was pending.

The flop came 5♦A♥4♣ and delivered a set of 4s for Ivey. The odds changed dramatically: now they were 96% to 4% in Ivey’s favor. The flop was certainly no good for Guoga, but he had got his second Ace and was probably counting on the next two cards. Ha raised to $15,000, and Phil quickly called. And now the Q♣ fell for the turn destroying Guoga’s long chances. He checked. Phil bet and made the pot of $36,450. And here was the mistake Tony G made. Perhaps, he realized the danger from 5♦ and 4♣ on the board but went all-in. It took the pot further up to $69,375.

Phil simply said “I call,” having not hesitated even for a moment, and that was the end of the tournament for Tony G! He came in 45th in the Monte Carlo Millions 2004. Phil Ivey had been dominating the scene of the whole tournament till the very end when Jani Sointula (1st place, $400,000 prize) put him only third. Phil’s prize was $100,000.

The beauty of poker is not only where the hands are strong and the odds are high. On the contrary, when players have nothing or next to nothing, and the stakes are high, we can see a game of chicken and can only guess who blinks first. That happens when both players are bluffing and re-raising and the pot gets inflated. Phil Ivey and Paul Jackson played such game in Monte Carlo.

And the flop came:

Both players could have counted on a better flop. But neither of them was connected to this one. And now each of them had to thoroughly examine the outs, and in particular, the possible ranges of the opponent. Perhaps, Ivey thought that Jackson’s range included flush draws and a full house while his own range was not looking good at all. However, with this board, it could well be that Jackson would only bluff, and Ivey decided to go up, leading out for 80,000. Jackson raised to 170,000.

At this critical point, Ivey re-raised to 320,000 and the hand clearly turned into a who-blinks-first fight. After a small hesitation (which must have given a lot of information to Ivey) Jackson further re-rose to 470,000 leaving behind only 380,000. Perhaps, he should have shoved, in order to maintain the illusion that he was drawing a flush or a straight; but this min-raising and leaving the chips behind was a clear indication for Ivey that his opponent was only bluffing.

Another thing was that if Jackson had a pocket jack he would not probably have raised that high when he just could have called and not to reveal the strength of his hand. The same was related to the possibility that Jackson was holding a pair of pocket 7s. Too much raising and re-raising for a really strong hand – that was what Phil Ivey probably thought about his opponent’s tactics. Jackson would definitely have raised slower, letting Ivey bet on the turn and on the river to further increase the pot. So everything was telling Ivey that the only range Jackson had was a bluff. And then Ivey moved in.

Spectators on the show were astonished to see 966,000 chip pot, and the two guys bluffing with practically nothing, both of them. And the question was: who was going to blink?

After Ivey shoved, Jackson must have realized that his bluff fell flat. And he folded. Ivey racked the pot. This was a good reward for reading the game in this hand, which has ended up was called “one of the sickest hands” in poker history.