Phil Ivey and Tiger Woods: Why Do People Still Compare Them?

Some people would call Phil Ivey “Tiger Woods of Poker.” But do they have many things in common? They are of about the same age, both of them dominated their respective fields, both are widely known and loved by millions, both had troubles in family life, both of them are black… What else?

The Age and the Looks

Phil Ivey was born on February 1, 1977, while Tiger Woods was born on December 30, 1975, both of them in California. This small difference in age has no visual effect on them. They are both African Americans and might seem to be two peas in a pod. But Woods has some Thai, Chinese, and Dutch ancestors. As for their nature, these two men have valuable character traits, because they faced a lot of obstacles on their way to the stars. They both know how to get to the top of their profession, and like anyone else, realize what lies behind all that success, wealthy life and popularity.

Both Ivey and Woods had divorced their spouses; and strangely enough, both did this at about the same time! I.e, Woods in August 2010, and Ivey in December 2009. What is more strange — or not strange at all, depending on how you view it — is that both Ivey’s and Wood’s ex-wives moved to Florida, having bought some large property out there.

As a result of their family troubles, both Phil and Tiger experienced serious drawbacks in their professional careers.

Tiger Woods is a golf icon, every bit as much as Phil Ivey is a poker icon. Both of them were called the world’s best players. Interestingly, they had shown their talents when they were kids. And both of them rushed into the world’s top in their sports flying as if on the wings of the wind. Indeed, they appeared in the first ranks very quickly, like having popped up from nowhere, when they were still very young. 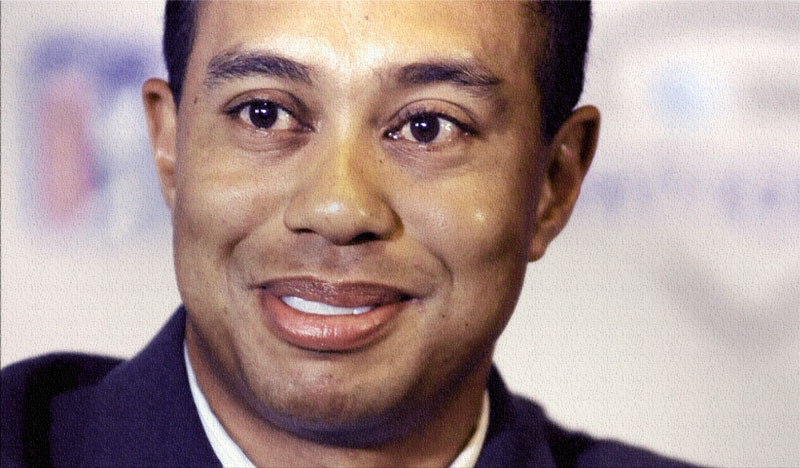 The old saying is very true: it is not as difficult to conquer a mountain as to stay on the top at least for a while. But that is what both of them did — they are still on the top, considered as the favorites in every big game they enter!

Phil Ivey is known to be a passionate sports fan, but golf is not the only sport he watches. Basically, he doesn’t just watch it; the poker player plays a lot as well! And he is fairly good at it as well. When Ivey lost a lot of money playing golf against two poker professionals from the UK: Mark Goodwin, and Ram Vaswani, he took a long break, training thoroughly with a professional golf coach for 6 months, and called Vaswani and Goodwin for a rematch. This time he actually beat his opponents.

Phil Ivey even finished 4th in the inaugural World Series of Golf, a tournament Tiger Woods did not participate in. The excellent golf skills of Phil Ivey might have been another reason for some people like to call him the “Tiger Woods of poker.” However, we haven’t heard anything about Woods being called the “Phil Ivey of golf.”

There were rumors that Tiger Woods would play a golf match against Phil Ivey, but it never happened, and such a match has hardly ever been discussed!

Are Such Comparisons Possible at All?

Strictly speaking, comparing top performers in different games is a thankless task. Even if you try to stay within one game, comparing them would still be very problematic. But golf and poker are two different universes! Perhaps the only thing that might be capable of bringing them together a little is that they are individual sports where everything depends on individual skills, training, concentration, talent, strong will, etc. Playing cards is totally different from team games like basketball, and nobody will ever call Phil Ivey the “Michael Jordan of poker.”

Most times people like the words of flowery, catchy titles, and snazzy comparisons! That is why calling Phil Ivey “the Tiger Woods of poker” is quite natural. Tiger Woods is #16 on the Forbes List of highest-paid athletes, with his $43.3 million standing next to Canelo Alvarez (#15 with 44.5 million). Ivey’s wealth, which is a whole other interesting topic we could pursue, is incomparably lower. Perhaps, then, this is the reason why nobody would ever call Tiger Woods the “Phil Ivey of golf!”